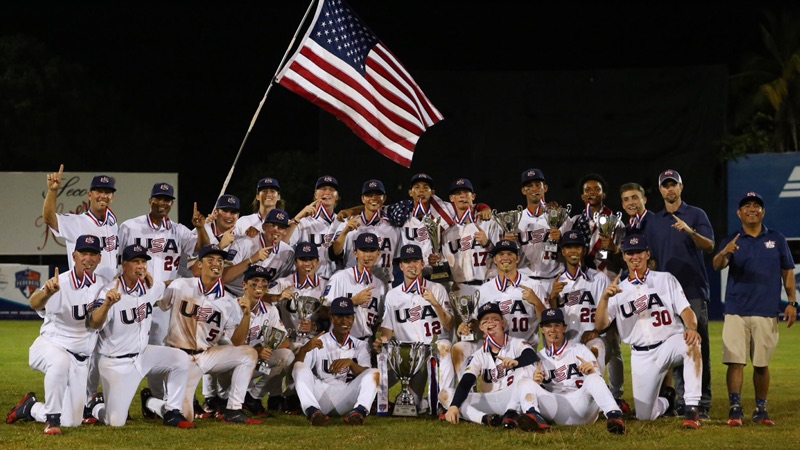 While I was coaching at Clemson from 1994-2015, I had been asked a few times to be on the USA Baseball coaching staff.  I turned each one of them down as I was too focused and dedicated to my job at Clemson to take the summer to travel with USA baseball.  I had family, recruiting, administrative, and camp responsibilities that always seemed to be my priority.  But, I always wondered what it would feel like to put on a USA baseball jersey!

When I finished college coaching in 2015, I got a call from Matt Blood, the Director of the 18U USA Baseball program.  We talked and I agreed to come to a few USA Baseball events in the summer of 2017.  In June, I coached at the Tournament of Stars at the USA Baseball complex in Cary, NC with 84 of the top 17-18 year old players in the country.  I then coached and instructed at the National Team Development Program (NTDP) in Chicago with 44 of the top 17U players and helped train and evaluate the top 44 18U players in Minneapolis at the 18U trials where the final 18U roster would be trimmed to a 20-man roster.  That team would then move on to play at the World Championships in Canada and win Gold under the direction of head Coach Andy Stankiewicz.

During this time I met and worked alongside some incredible coaches and people that I would never have met had I still been coaching in college.  I also had the pleasure of working with, teaching, training, and developing some of the most gifted young baseball players in the country. The coaches were eager to share, learn, and instruct.  The players were coachable, motivated, talented, and energetic.  The goal of everyone was to teach, evaluate, and develop these players and give them every opportunity to make the 18U USA team that would represent the USA in the 2017 World Championships and groom the younger players to make the 18U team that would play in the 2018 Pan Am games in Panama and qualify for the 2019 World Championship in South Korea.

At the end of the 2017 NTDP week in Chicago, I sat in the dugout after the last game.  I had missed coaching, the on field teaching, the bonds with fellow coaches, the relationships with the players, and the competition with a purpose.  Honestly, I sat in the dugout alone, the last one to leave, emotional and close to tears.  I missed it. I had coached in college for 38 years since I was 23. I needed it, I wanted it again, and I wasn’t ready to say “no more”… I was born to coach!   It’s a big part of who I am. It’s what I do.

I walked slowly to the bus knowing what I had to do.  Matt had wanted me to coach the 18U team in 2018 and 2019.  I needed the summer events to see what might stir inside me.  Before boarding the bus, I asked Matt, “you want me to coach this team?” I knew the response but I wanted to hear it.  “I’d love to have you coach this team,” was his response.   I felt a swell of pride, raw emotion, and a sense of duty then.  I missed it, I needed it, it’s in my DNA.  I need to teach, motivate, develop, share my knowledge and experience. I need to be around players who are motivated, talented, and coachable.   I needed to have fun and laugh again in the dugout and on the field.  I needed to plan practices, talk to the team, and hit fungos again.  I needed the structure, discipline, and to crank my engine back up.  I needed to get back on the field and be a part of these kids lives and help create some memories for all of us that would last a lifetime. I needed the competition and to kick another team’s ass! I needed to be around other coaches who care, and I wanted to keep learning about this great game.

It was important for me to do these things in an environment and structure of pride, discipline, and respect. That is what I saw in USA Baseball.

So the challenge was accepted, and so in the summer of 2018, I headed to Cary, NC for the Tournament of Stars and the 18U USA trials.  In two weeks time we taught, evaluated, and trimmed 88 players, to 44, then to the 26 that we would take to Ft. Lauderdale to train in November.  Of those 26, 20 players would make up the 18U roster to travel to Panamá for the Pan Am games.

In Ft. Lauderdale, we trained and played each day to evaluate, improve, insert our system, and pull them together as a TEAM.  At the end of the week, we had to make some tough decisions in narrowing the team down to 20 and then headed to Panama to compete for Gold with 13 Latin American teams and Canada.  The top 4 teams would qualify for the World Championships in South Korea in 2019.  Our goal was simple: to show the other countries how the USA plays baseball and conducts itself on and off the field.  With energy, hustle, discipline, talented and motivated assistant coaches (Ritchie, Bankhead, Melendez) and players, we set out with the purpose of winning Gold for the USA. Warming up and taking ground balls in parking lots, “it didn’t matter!” The players bought into the system and style of play and elevated their unselfish attitudes and played to our high expectations.  A strong combination of hitting, base running, pitching, defense, and fierce competitive attitudes crushed the competition.  The team scored 131 runs, got great pitching performances, played great defense, ran the bases aggressively, had the tournament MVP in Bobby Witt Jr. and each player contributed to our 9-0 record.

At the end, after a dog pile on the mound and wet Gatorade drenched jerseys, we had Gold 🥇’s around our necks and eyes fixed on the flag as they played our National Anthem 🇺🇸!  It never sounded so good!!

USA Baseball earned respect in Panama!  What a year!  On to South Korea in 2019, chasing Gold!!